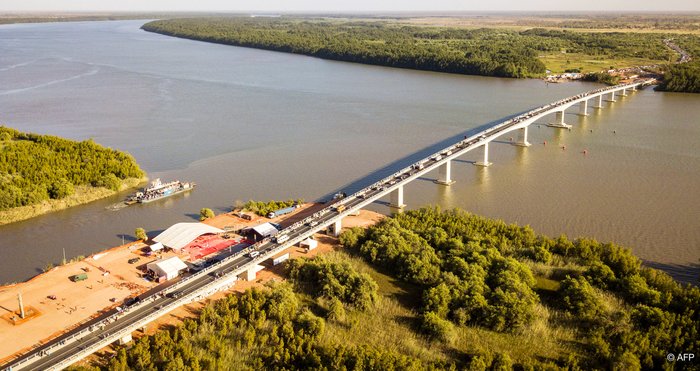 Cars, trucks and pedestrians plied the new bridge linking the Gambia and Senegal Thursday, ushering in a new era of connectivity and integration for the two West African nations.

The bridge is a safer, quicker, and alternative route to the risky ferry crossing or the long detour between the northern and southern parts of both nations. The five-storey masterpiece allows people from the north of Senegal rapidly and easily to reach the southern Senegalese province of Casamance.

“The African Development Bank, your Bank, is here to congratulate the people of Gambia and Senegal for their determination and relentless efforts in ensuring that the vision to connect the North and South banks has finally came to fruition over 40 years after the idea was conceived…The inauguration of this bridge comes at an opportune time- less than one year after the launch of the African Continental Free Trade Area (ACFTA) in Kigali, Rwanda,” said Bank Senior Vice President Charles Boamah, who attended the formal inauguration ceremony on Tuesday. The African Development Bank has played a lead role in the project from its inception, providing financing, technical and supervisory support.

The construction of the bridge (942 m long), along with two border posts, completes the first phase of the road project which has cost $93.68 million. The project is almost entirely financed by the African Development Bank Group  through a grant of $88.4 million to Gambia, and a $4.4 million loan to the Government of Senegal.

Presidents Adama Barrow of The Gambia and Macky Sall of Senegal presided over the inauguration, witnessed by local and foreign dignitaries, government officials, religious leaders and inhabitants of the northern town of Farafenni, where the bridge is located.  The two leaders later made a ceremonial crossing in an open-top vehicle over the bridge.

The bridge, which spans the Gambia River, will enable free traffic flow between the northern and southern parts of both The Gambia and Senegal, and is expected to reduce travel time, boost trade and unite communities that were previously isolated. It will also facilitate and increase sub-regional trade and open up rural areas; while increasing the level and quality of service of the Nouakchott-Dakar-Lagos road corridors

Before the construction of the bridge, travelers had to wait hours or even days for a ferry, leading to huge losses of perishable goods and market produce. The border posts will reduce customs formalities time at the borders, thus enhancing the potential for increased trade and business.

The project aligns with The Gambia’s National Development Plan which recognises high transport costs as a major barrier to development of productive sectors of the economy. It is also consistent with the African Development Bank’s Regional Integration Strategy Paper for West Africa and its Integrate Africa High 5 priority.

The project also contributes to Senegal’s 2014 Emerging Senegal Plan, which emphasises structural transformation of its economy and growth, human capital and social protection and governance.

The bridge opened on Wednesday to the general public and light vehicles.