Guaranty Trust Bank PLC recently released unaudited 9M-19 numbers today, which showed that the bank’s performance has not been adversely affected as of yet. The result was in line with expectations as gross earnings declined while profitability expanded moderately. The performance was underpinned by non-funded income growth, as interest income growth continues to lag the prior year.

Interest expense also declined by 23.4% y/y to NGN32.63 billion, as the bank shed high cost deposits during the year – interest on deposits from customers declined by 20.4%y/y to NGN42.90 billion –, while zero cost on debt securities relative to the prior year (NGN4.34 billion) also contributed. Consequent on the higher pace of decline in expense relative to income, the bank’s net interest income settled higher by 1.3%y/y.

Similar to many banks, the bank’s non-interest income growth has outpaced interest income growth, as non-funded income grew by 3.0% y/y at NGN100.07 billion. This was supported by fees and commissions income which grew by 22.9% y/y to NGN46.50 billion. Notably transaction volumes have continued to grow, supporting E-business income (+63.1%y/y to NGN11.04 billion), while credit related business charges (+37.1%y/y to NGN9.08 billion) have also boosted the bank.

Given the growth in non-funded income, which was enough to offset the decline in interest income, operating income grew by 1.6% higher year-on-year to NGN270.25 billion. Also, operating expenses declined by 2.2% y/y to NGN99.60 billion, with declines across personnel costs (-2.9% y/y to NGN27.30 billion) and AMCON levy (-5.0% y/y to NGN15.49 billion) supporting the moderation. Consequently, the bank’s cost-to-income ratio settled at 36.9% relative to 38.3% in the corresponding period of the prior year.

This further translated to an expansion in profitability, as profit-before-tax settled 3.9% higher y/y at NGN170.65 billion, while profit-after-tax grew by 3.4% y/y to NGN146.99 billion, on account of a 7.4% y/y increase in tax expense. This translated to Return on Average Equity and Return on Average Assets ratios of 32.3% and 5.8%, respectively.

In our view, the bank’s macro-prudential ratios are above par, with only the non-performing loans ratio settling above the regulatory limit (5.6% relative to 5.0% statutory limit), although we note the significant decline from 6.8% as at H1-19. All other ratios are settled well above regulatory minimums; Liquidity ratio (36.8% relative to 30.0%), Capital Adequacy (28.1% relative to 16.0%). Also, we note that the bank’s current reported loans to deposit ratio (54.0%) is below the new minimum LDR of 60.0%, despite loan growth settling at 9.4% relative to 1.1% at H1-19.

Comment: This result is in line with our expectations, although the significant improvement in non-performing loans level, which can only in part, be explained by the expansion of the loan book, and is a welcome surprise. We expect the bank to post a stronger FY-19 performance than represented here, as interest income growth accelerates moderately above the current run-rate in Q4-19. 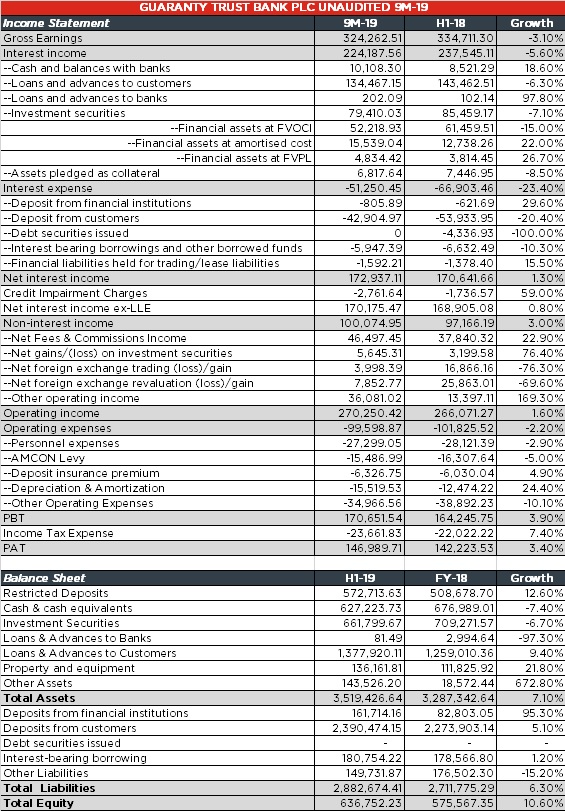