Event: NB published Q4-19 and 2019FY audited results after the close of market yesterday, reporting EPS decline of 17.6% y/y in Q4, driven by higher operating expenditure, and significantly higher net finance costs, both of which offset the increase in gross margin. The achieved FY revenue is slightly below consesus estimates (-1.3% variance), while EPS came in much lower than consensus (-11.5% variance). On the 2019FY EPS of NGN2.01 (+17.1% vs. 2018FY), the board has proposed a final dividend of NGN1.50/s, in line which equates to a yield of 2.9% on yesterday’s closing price (NGN51.50/s).

Net revenue grew 1.2% y/y (2019FY: -0.4% y/y) in Q4, albeit lower than our estimates (3.9% variance),  on price and mix gains, with revenue benefitting from slight price increases taken across its premium portfolio in the period. This is the strongest y/y revenue growth since Q3-17. Heineken NV (NB’s parent company) in its 2019FY earnings call, stated that Heneiken brand and the premium portfolio recorded double-digit volume growth. We note that gains at the gross revenue level were slightly eroded by the higher excise duty expense compared to last year – NB did not report gross revenue and excise duty numbers in its 2019FY results.  Sequentially, net revenue grew 33.3% q/q – the impact of the price increases and Q4 being a seasonally strong quarter due to the year end festivities.

Gross profit margin (+288 bps y/y) widened to 40.2% in Q4-19, although was lower than the 44.4% we estimated. The gross margin recorded was the best Q4 performance in 2 years and was driven by continued productivity gains (COGS declined 3.5% y/y) as well as the continued growth in the high margin premium segment.

Comment: We like that the company continues to record improved (1) improve volumed outturn, (2) productivity,  and thus (3) relatively strong gross margins, especially amidst the challenging operating environment. Following further price increases to cover the VAT adjustment, we expect sustained improved performance in Q1-20. NB’s share price is down 12.7% YTD and the stock is trading on 2020E P/E of 17.3x, a discount to historical average forward P/E of 22.8x. Our estimates are under review. 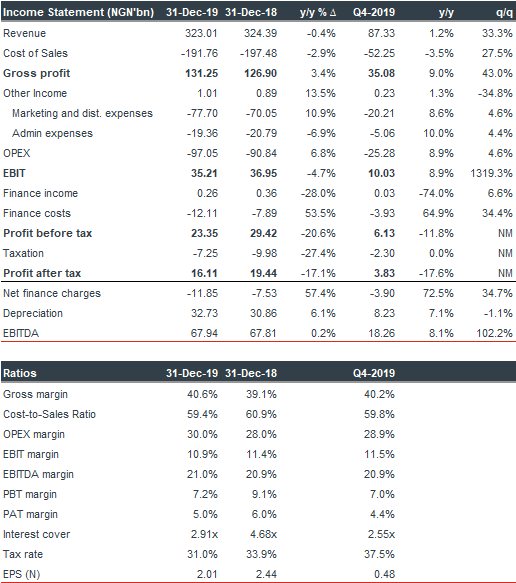