ZENITHBANK recently released its audited FY-19 numbers, which were generally in line with our expectations. As expected, the performance was supported by strong non-interest income growth, just as interest income declined during the period. However, due to the stronger expansion in NII, the bank recorded good growth in profitability. Also, the bank proposed a final dividend of NGN2.50/s, which translates to a dividend yield of 12.9%, based on the last closing price of NGN19.40 (20 February 2020).

Also, interest expense grew by 2.8% y/y to NGN148.53 billion, reflecting the higher cost of deposits from customers (+12.0% to NGN80.58 billion). Similar to interest income, there was significant growth in interest expense q/q by 7.9%. Given this expansion, it is clear that the bank took on higher cost deposits.

Operating expenses growth was muted, as the bank continued to focus on cost management in the face of weak income growth. Opex grew marginally by 2.8% y/y to NGN231.83 billion, with the most pressure exerted by personnel expenses (+13.6% y/y to NGN77.86 billion), which constituted 33.6% of Opex. Consequent on the muted Opex growth relative to operating income growth, cost-to-income ratio (ex-LLE) settled lower at 48.8% relative to 49.3% in the prior year. Also, profitability was stronger, with profit-before-tax settling 5.0% higher year-on-year, while profit-after-tax settled 8.0%, on account of a 10.0% decline in income tax expense.

Comment: The bank’s performance remains in line with expectation. The improved growth in interest income quarter-on-quarter is in line with our prognosis, however, we expect pressure on interest expense in 2020, due to the implementation of the higher CRR (although the DCRR may ameliorate this somewhat). We are reviewing our estimates. 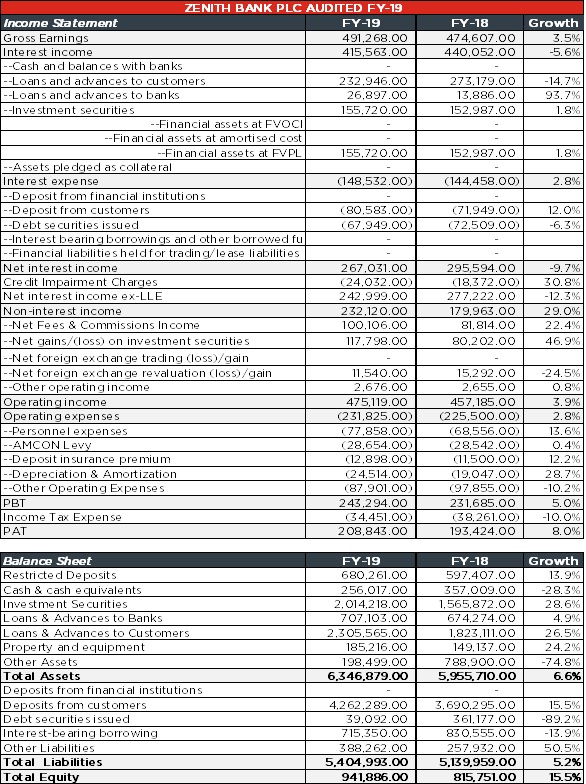