5 hours ago
New Index: A Young Population Has Been Africa’s Best Defense Against COVID-19 Deaths So Far, But Several Regions Are Dangerously Vulnerable
5 hours ago
AfDB Regional Economic Outlook 2020: In West Africa, harnessing the youth workforce could speed economic recovery in the post-COVID-19 era
5 hours ago
SEC, NITDA collaborate on Data Protection
5 hours ago
Record fall in employment as activity continues to decline
2 days ago
NSE Announces August 22, 2020 Date of Rules on Release Calendar for Regulatory Announcements

Since the combination of the coronavirus pandemic and the oil price war that has depressed Brent crude price from as high as US$68 earlier in the year to lows of US$21, the FG has been scrambling to take palliative fiscal measures in tandem with the current economic realities. 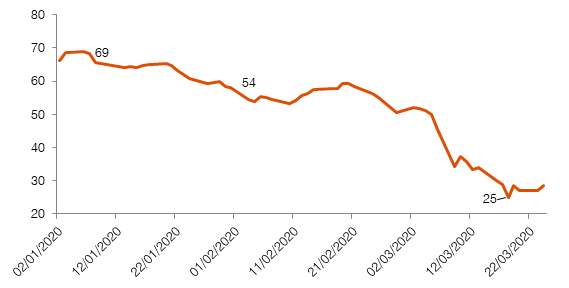 One of the oldest and most repeated economic solutions proffered to the Nigerian economic leadership borders on diversifying its interests in the oil and gas space as it constitutes about 90% of export value, two-thirds of revenues and the bulk of FAAC allocations to the three tiers of government.  Yet and still, little progress has been made on the diversification agenda front and the country finds itself in a vulnerable position once again. 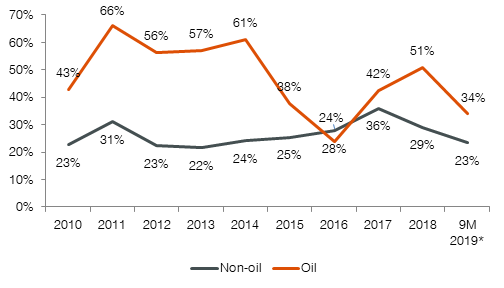 We take a look at some of the fiscal implications and reactive measures put forward by the Minister of Finance as well as the CBN.
The Finance minister announced some significant proposed changes to the 2020 budget, such as: 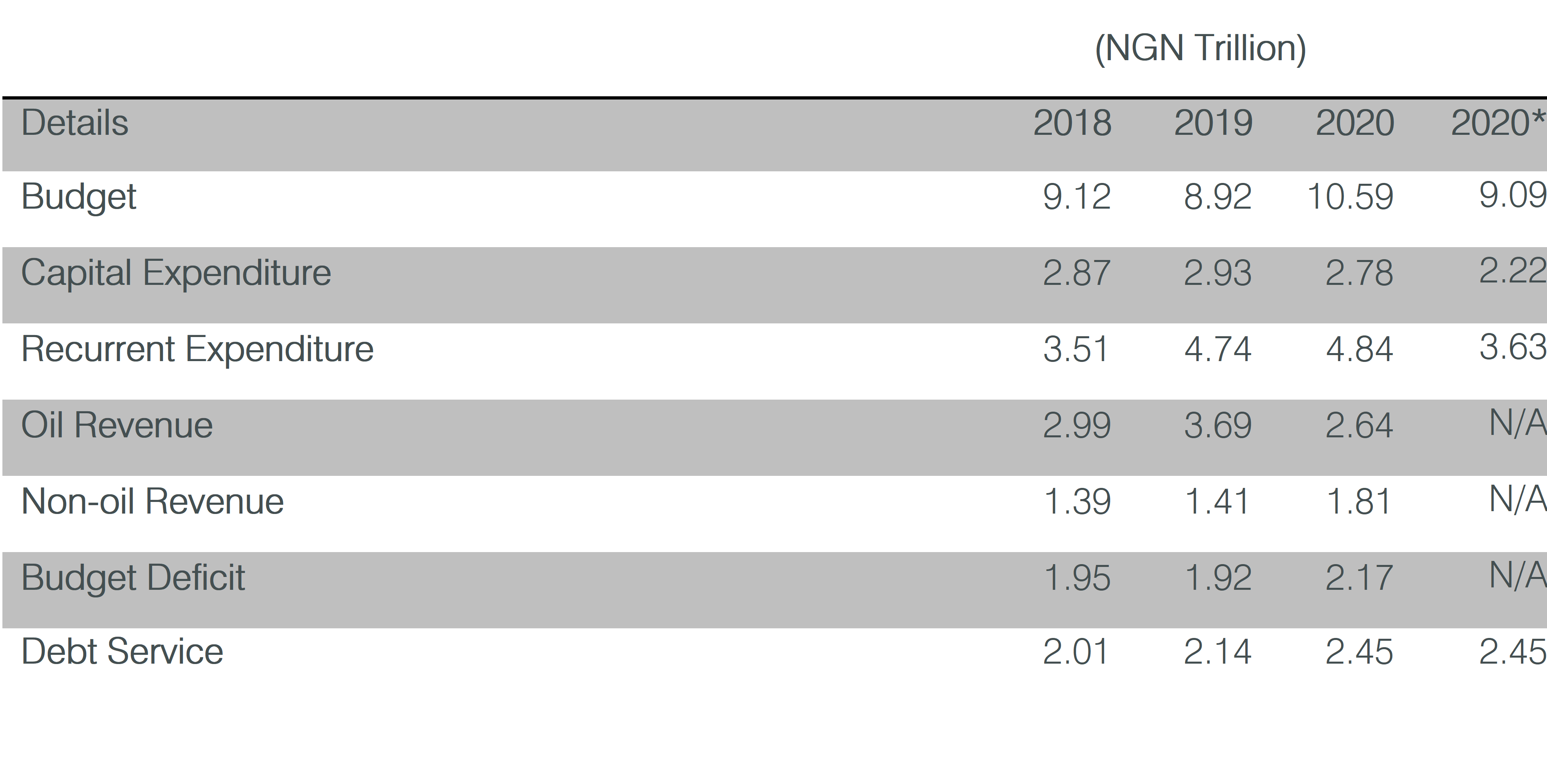 *estimated targets based on cuts stated by the Finance minster
Source: Budget Office, Ministry of Finance, Investment One Research

While we raised numerous question marks regarding the funding sources earmarked for revenue generation as shown in the 2020 budget document when it was released, we believe the factors playing out right now, much to the detriment of the country’s financial position, create even worse realities for the budget’s implementation.

The 2020 budget was laden with bloated and unrealistic assumptions ex-ante coronavirus, particularly relating to revenue generation. With oil revenues projected to take a hit this year and no respite in sight given the poor results from the revenue diversification agenda of the FG, growth in non-oil revenues remains uninspiring.

Flash-forward  three months since the budget was passed and the economic realities are even direr than previously predicted. Brent crude has traded as low as US$24 per barrel, the lowest in over 18 years on the back of a price war between the leaders of the OPEC+ and the attendant decline in global economic activities influenced by the wide spreading virus. Stepping away from oil revenues, we see non-oil revenue taking a significant hit on the back of a domino effect. Major sub-segments like Company income tax, customs revenue, amongst other segments, are set to decline following reduced levels of economic activities, uncertainty and dwindling trade volumes.

Given these events, the FG has made moves to cut expenditure across major segments, of which we are unsure match up to shortfall in revenues necessitating further borrowings or even steeper expenditure outlays.  We believe the segment which may be most affected by the cash crunch is capital expenditure, which has borne the brunt of low revenue generated in previous budgets.

Figure 3 : Capital Expenditure- The Neglected One

The effects of the fiscal squeeze could be quite devastating for the economy. We believe the country lacks the fiscal buffers to absorb economic shocks such as this. The excess crude account, which was set up to be a ‘rainy day fund’ has a balance standing at US$72.2million. Revenue to GDP still stands very poorly <10% within the last decade as the FG struggles to squeeze out adequate levels of tax (Tax to GDP stands at 6-7%). This spells negatively for output growth as much needed expenditure to achieve structural reforms, create more favourable business conditions through policy initiatives and support the more vulnerable groups within the country comes under pressure.  While a fiscal policy the executive arm could be considering is a tax cut/holiday incentive, we see the likelihood of this as very low given the poor tax net and collection coupled with poor revenue mobilisation from non-tax sources.

Moving to other tiers of government, we believe the effects of lower revenues would further extend to lower FAAC allocations, which most states are survival-dependent on, compared to last year. We highlight that the FAAC meeting ended in a deadlock as a result of lower than expected revenue to be shared. With the rescheduled meeting seeing only N581.57billion shared among the three tiers of government, the lowest since Q3 2017 and the outlook portending towards even lower figures, this spells for worsened financial conditions for states, increased budget deficit necessitating higher borrowings and likelihood of another bailout fund even with the 2017 bailout outstanding liability. Although FAAC should see some positivity from the recent devaluation in the official rate, the rate used to convert oil proceeds, we do not believe this would be enough without a monumental change in global events.

CBN to the Rescue?

With the fiscal authorities largely cash-strapped, we expect the CBN to grab the wheel in a bid to steer the economy back to stability. The apex bank recently announced monetary policies and stimulus packages ranging from interest rate reduction on intervention loans to credit support to healthcare industry, amongst others. More eye opening was the N3.5trillion stimulus package pledged by the CBN, which includes the previously planned N1.5trillion to aid the manufacturing and production sector in a bid to provide relief for the supply side. While this is commendable, we remain concerned about consumer demand which still remains largely fragile. This could be further exacerbated as the impending impact of a shutdown of the country’s borders and a probable shutdown of cities leads to goods shortages . Fiscal policy stimulus coupled with better suited directives, taking into cognizance Nigeria’s peculiar situation, are very much needed to limit the impacts of this pandemic in Nigeria. We highlight that there is chatter of an Emergency Economic Stimulus Bill, which aims to roll back the depleting effects of the virus within the nation through provision of job protections incentives, temporary tax exemptions to companies, a moratorium on mortgage obligations for individuals, amongst other initiatives.