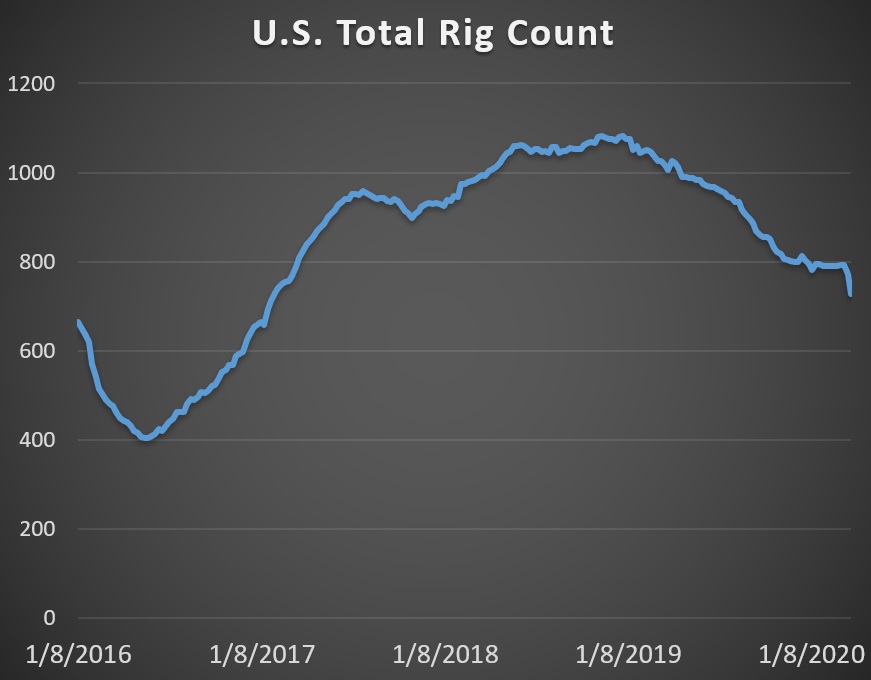 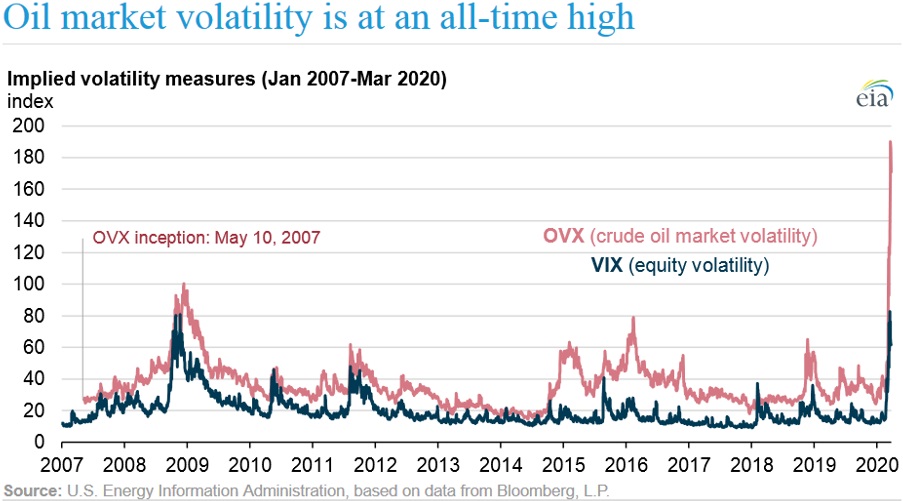 –    The OVX index measures implied volatility of oil prices and is calculated by using movements in the prices of financial options for WTI.

–    Since 1999, daily movements in oil prices remained below 2 percent roughly 70 percent of the time. There have only been a handful of times in which prices moved by more than 10 percent in a single day in the past 20 years, but that occurred 6 times in March 2020.

–    TC Energy (NYSE: TRP) said it would move forward with the Keystone XL pipeline if the provincial government of Alberta chips in $1.1 billion in equity.

–    Valero (NYSE: VLO) said it would curtail operations at two more refineries, including its St. Charles refinery in Louisiana and its Port Arthur, TX refinery.

WTI opened slightly up but, at $20 per barrel, remains stuck at 18-year lows. There are few reasons to be optimistic, as most analysts see demand destruction growing by the day. It seems the rebound in oil prices earlier in the month was only a temporary relief.

Demand destruction to exceed 20 percent. Global oil demand could fall by more than 20 mb/d, and market forecasts continue to see daily revisions. “Oil demand is breaking away, probably by much more than the 20% we have currently in our books for April/May,” JBC Energy said.

Trump speaks with Putin. President Trump spoke with Russian President Vladimir Putin on Monday, and they agreed to have their top energy officials discuss the sliding oil market. Trump is trying to convince Saudi Arabia and Russia to back off the price war, but has little leverage. “I never thought I’d be saying that maybe we have to have an oil (price) increase, because we do,” Trump said prior to the call on a Fox News interview. “The price is so low now they’re fighting like crazy over, over distribution and over how many barrels to let go.”

North Sea platforms hit by coronavirus. The FT reports that more than a dozen workers at an offshore platform in the North Sea had to be quarantined from the rest of their crew because of the coronavirus.  “Staffing will really be an issue,” one industry executive told the FT. “The reality is that people working on these sites will get it. You can’t have the entire world in lockdown but keep these projects running just as they have been.”

African oil producers struggle. Oil producing countries in Africa will struggle with low prices. Nigeria could see production fall by 35 percent without offshore investment. The continent could see production fall by 200,000 bpd through 2025, according to Rystad. The downturn threatens government finances. “This is really different terrain, and these are very vulnerable economies,” Alex Vines, head of the Africa Programme at British think-tank Chatham House, told Reuters.

10 mb/d of production to be shut-in. IHS Markit says that 10 mb/d of global production could be shut in between April and June. Other analysts have smaller numbers. OPEC+ is expected to add 4 mb/d this year, but total global production could fall by 200,000 bpd, according to Energy Aspects, which highlights just how much supply needs to contract in non-OPEC countries. Goldman Sachs puts global decline at 900,000 bpd, “with the true number likely higher and growing by the hour.” Goldman said production capacity could shrink by 5 mb/d this year.

Trump to finalize weaker fuel economy standards. The Trump administration is set to announce its final rule for weaker fuel economy standards on Tuesday. The new rules will allow the U.S. auto fleet to emit nearly 1 billion tons more of CO2 over their lifetimes than the Obama-era rules. The old rule would have required automakers to achieve 55 miles per gallon across their fleets by 2025. The Trump rule will lower than to 40 mpg.

Oil storage in danger of filling up. The global oil market is “broken,” with storage filling up and surplus cargoes selling for steep discounts, according to Bloomberg. At current rates, storage could top off in just a few months. “The physical oil market has seized up,” said Gary Ross, chief investment officer of Black Gold Investors LLC.

Refineries blast Trump admin on ethanol. The Trump administration has decided not to appeal a federal court decision that limited the government’s ability to issue waivers to refiners to allow them to get out of their ethanol blending requirements. It’s the latest twist in a multi-year battle between refiners and the ethanol industry, and the latest chapter ends in the favor of ethanol. At the same time, ethanol plants are shutting down because of collapsing demand.

Lenders take control of Sanchez Energy. The top lenders of Sanchez Energy (OTCMKTS: SNECQ) took a majority stake in the company after the driller was unable to pay back $200 million in bankruptcy loans that have kept it afloat during the proceedings, according to the Wall Street Journal.

PBF Energy sells assets, sees stock jump. PBF Energy (NYSE: PBF) saw its stock price jump 20 percent on Monday after it announced an asset sale and spending cuts. But Bloomberg Energy analyst said the moves won’t be enough and the refiner will need to draw on its credit facility.

Aramco considers pipeline sale. Saudi Aramco (TADAWUL: 2222) is considering a sale of a stake in its pipeline unit in an effort to raise cash, and the company thinks it can raise $10 billion from the sale.