WAPCO published Q4-19 and 2019FY audited financials this morning. The result showed that the company’s 2019FY EPS settled NGN7.15/share, up from a loss position in the previous year. The positive outturn was driven by the one-off gain from the sale of Lafarge South Africa Holdco. (LSAH) in Q3-19. We understand that the comparative year now excludes the profit and loss statement of LSAH. Adjusting for the gains from the discontinued operation, WAPCO’s core EPS grew marginally by 2.8% y/y, supported by the blend of lower finance charges, higher other operating income, and lower operating expenses. On the 2019FY reported EPS, the board has proposed a final dividend of NGN1.00/share, which implies a dividend yield of 10.2% on today’s closing price (NGN9.80/share).

Excluding LSAH, the Group’s aggregate revenue declined by 4.3% y/y in Q4-19. While breakdown was not provided, we believe the significant price erosion witnessed over Q4-19 must have weighed on revenue in the review period. For the sake of reference, DANGCEM recorded a marginal decline in average price (-0.1% y/y) in Nigeria in the corresponding period. Management acknowledged, during our engagement this morning, that volume grew in the lower single-digit region, while prices declined slightly due to the aggressive competitive landscape. For 2019FY, revenue only declined by 2.2% y/y, split across cement (-1.6% y/y) and aggregate (-21.2% y/y). We believe the decline in revenue was largely driven by lower selling prices.

The Group’s gross margin deteriorated by 454bps in over 2019FY, following a 4.2% y/y expansion in COGS relative to the decline in revenue (-2.2% y/y). The increase in COGS emanated from production (+17.6% y/y) and depreciation (+50.8% y/y) costs. Elsewhere, operating expenses (including other operating expenses) moderated significantly by 21.7%. Nonetheless, EBITDA (pre-IFRS 16) declined by 12.6% y/y, setting the stage for a 2.0ppts decline in EBITDA margin.

Further down, WAPCO’s core earnings got a lift from the material decline in finance charges (-51.5% y/y) as the company reduced its total debt outstanding to NGN37.1 billion, from NGN288.9 billion in the prior year. Overall, the company returned to profit, as PBT settled at NGN17.89 billion, following two consecutive years of pre-tax losses. Also, PAT grew by 91.6% y/y.

Comment: The growth in EPS over 2019 was not surprising, as we had expected the combination of lower finance charges and the company’s cost-cutting measures to support earnings. While the company’s share price returned a 9.5% gain in today’s trading, we expect investors’ reactions to remain positive in the near term. Our last communicated fair value estimate was NGN26.22/share. Our estimates are under review. 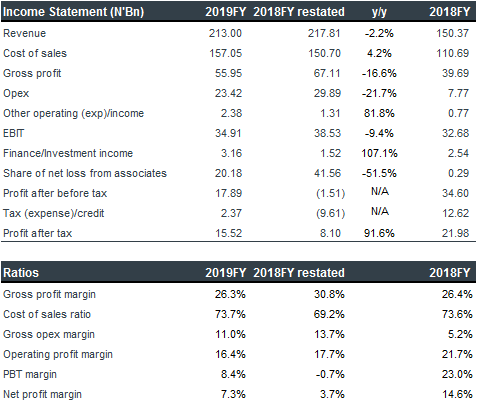