COVID-19 is crippling the economies of rich and poor countries alike. Yet for many low-income and fragile states, the economic shock will be magnified by the loss of remittances. In a new article for F&D, the IMF’s Antoinette Sayeh and Ralph Chami dig deeper into how the pandemic threatens to dry up this vital source of income, and what measures can be taken to tackle this challenge.

Remittance flows into low-income and fragile states represent a lifeline that supports households as well as provides much-needed tax revenue. As of 2018, remittance flows to these countries reached $350 billion, surpassing foreign direct investment, portfolio investment, and foreign aid as the single most important source of income from abroad (see Chart 1). A drop in remittance flows is likely to heighten economic, fiscal, and social pressures on governments of these countries already struggling to cope even in normal times. 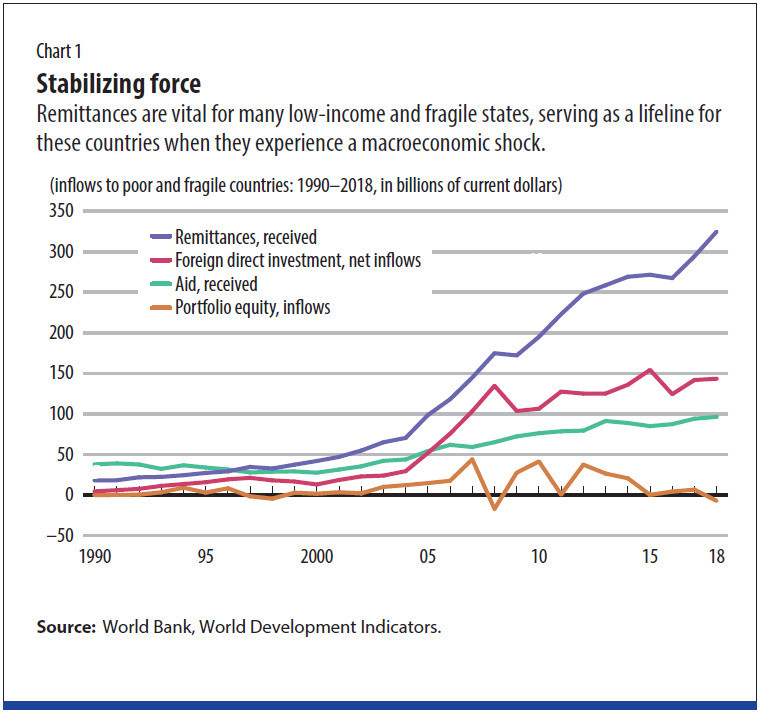 Shocks to the economies of migrant-host countries—just the sorts of shocks being caused by the coronavirus pandemic—can be transmitted to those of the remittance-recipient countries. For example, for a recipient country that receives remittances representing at least 10 percent of its annual GDP, a 1 percent decrease in the host country’s output gap (the difference between actual and potential growth) will tend to decrease the recipient country’s output gap by almost 1 percent. Remittances represent much more than 10 percent of GDP for many countries, led by Tajikistan and Bermuda, at more than 30 percent (see Chart 2). 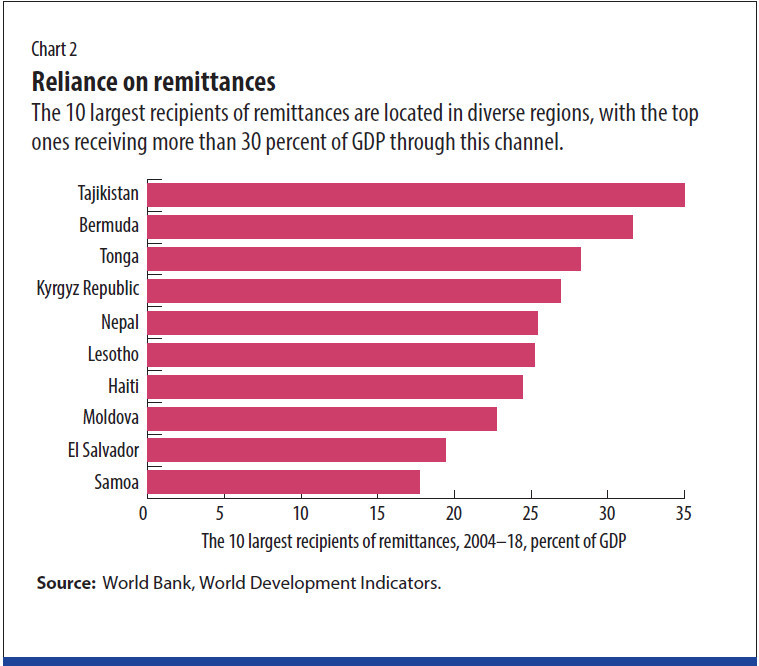 The pandemic will deliver a blow to remittance flows that may be even worse than during the financial crisis of 2008, and it will come just as poor countries are grappling with the impact of COVID-19 on their own economies. Migrant workers who lose their employment are likely to reduce remittances to their families back home. Recipient countries will lose an important source of income and tax revenue just when they need it most. In fact, according to the World Bank, remittance flows are expected to drop by about $100 billion in 2020, which represents roughly a 20 percent drop from their 2019 level (see Chart 3). Fiscal and trade balances would be affected, and countries’ ability to finance and service their debt would be reduced. 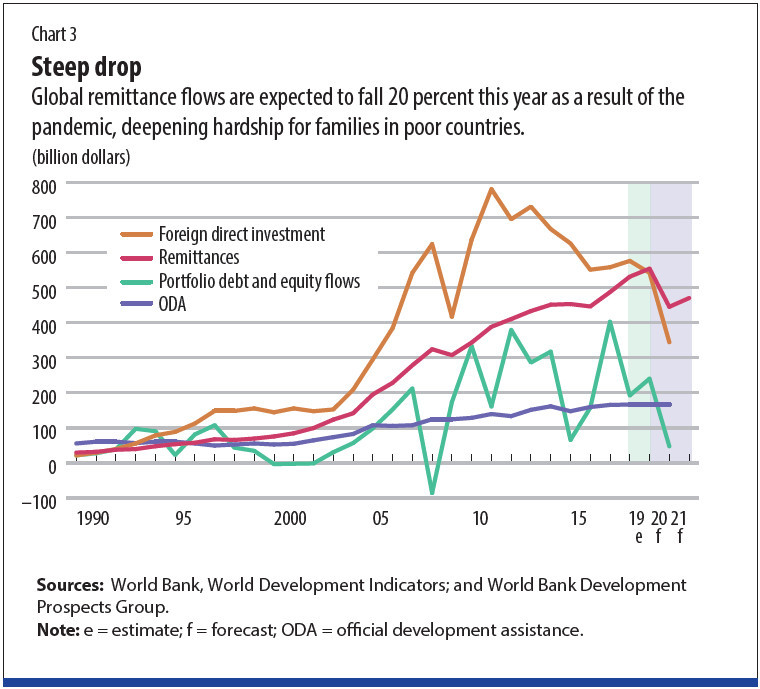 A prolonged crisis could worsen pressure in labor markets of rich countries, and out-of-work migrants could lose their resident status in host countries and be forced to return home. For example, in Gulf states such as Saudi Arabia and the United Arab Emirates, which rely on migrant labor from the Middle East, North Africa, and Southeast Asia, the drop in the price of oil and economic activity could result in migrants (some of whom are already infected with the virus) returning home. They are likely to join the jobless in their home countries—in labor markets already brimming with unemployed youth—as well as put more pressure on already fragile public health systems. This could heighten social pressure in countries already ill prepared to deal with the pandemic and possibly also fuel spillovers beyond their borders.

People escaping tough situations in their own countries are likely to seek other shores, but richer countries, also in the midst of fighting the virus, may have very little desire to allow migrants in—potentially leading to an even greater refugee crisis.

WHAT CAN BE DONE?

It is in the best interest of rich countries for migrants not to go home, as well as to provide resources for poor countries to fight the pandemic. Infection rates are much higher in rich countries and are especially high among migrant workers owing to their dismal working and housing conditions. Migrants who go home are at risk of taking the virus with them. If this happens, poor countries will provide a rich incubator for the virus that will boomerang as refugees seek new shores. Then it will take decades—and many lives—for the world to be rid of this virus.

Second, countries receiving returning migrants will need help to contain, mitigate, and reduce the escalation of outbreaks. Donor countries must help with the cost of virus mitigation, in an effort to lessen the severity of the crisis in local economies and stave off potential spillovers.

And third, given that poor countries’ governments have limited room for maneuver, these countries will need the assistance of international financial institutions and the donor community. International financial institutions need to shore up fiscal and balance of payments assistance to these countries. Perhaps now more than ever, the global effort to meet Sustainable Development Goal 10—reducing the high cost of remittances to 3 percent—could take center stage.

What does the remittance crisis look like in your country? What are some other ways in which we can tackle this challenge from a policy lens? Let me know. I would love to feature reader comments next week.