Surprisingly, the Monetary Policy Committee of the CBN at the end of its meeting yesterday cut the benchmark interest rate by 100bps to 11.50%, the lowest rate since 2016. In the same vein, the Committee adjusted the asymmetric corridor to +100/-700 bps around the MPR from +200/-500 bps, while keeping CRR at 27.50% and Liquidity ratio at 30.0%. Despite the continuous rise in headline inflation, the Committee cut the benchmark interest rate, as it believes the current uptrend in consumer prices is not a result of monetary factors; the rate cut indicates the apex banks’ commitment to spur quick economic recovery.

While current inflation level is well above its long-term inflation target of 6-9%, the committee indicated that it is trying to fight inflation through expansionary policies; this implies targeting increase in overall output. Consequently, we expect the Bank to channel cheap credits to key sectors in order to fix the structural problems. 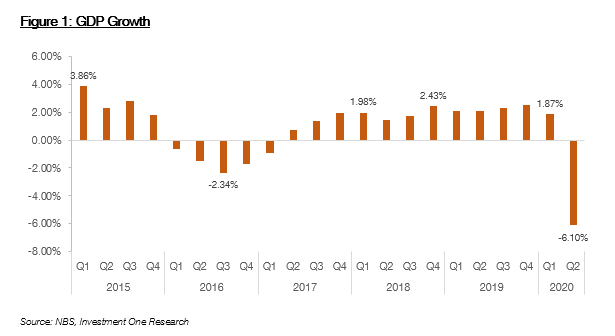 While we understand the current inflationary trend is hinged more on cost-push factors especially as food supply and productivity remains weak relative to demand, we did not expect the committee to cut MPR so quickly as the last rate cut has not transmitted to significant improvements in output. However, it is broadly in line with the apex bank’s stance to boost credit growth significantly.

Elsewhere, with a weak transmission mechanism, we doubt the potency of the rate cut in fostering significant impact on economic growth. With that said, we expect more efforts from the fiscal authority to focus on ease of doing business as well as other growth stimulating factors that the nation has been battling with for a long term. While we commend the reforms in the Oil & Gas and Power sectors, though with reservation around the timing, we opine that more fiscal policies have to be rolled out for this rate cut to have a major impact on long-term growth.

With this rate cut, we expect interest rate on savings deposit to fall further. We recall that CBN had recently cut interest rate on savings accounts to 10% of the MPR from 30%. This means interest rate on savings accounts has been effectively reduced to 1.15% (10% of 11.5%) from 1.25% (10% of 12.5%). While this should further reduce cost of funds for banks, it may further discourage savings deposits. Likewise, the threshold for rates at the CBN’s SLF & SDF window will fall from the previous 14.5% and 7.5% to 12.5% and 4.5% respectively. We posit that this rate cut suggests that interest rates may remain quite low in the near to medium term. As such, negative real return on fixed income investments is expected to steadily increase as we expect headline inflation to continue its upward trajectory.

Furthermore, the rate cut may further discourage investment in Naira and Naira denominated assets, as yields remain unattractive. Local Investors may begin to seek opportunities in the Eurobond space as they weigh the rationality of investing in Naira at similar yields as that on Eurobond. In juxtaposition with the current FX illiquidity, we expect FPI to continue to shy away from our market in the near term as risk-adjusted returns remain unattractive. 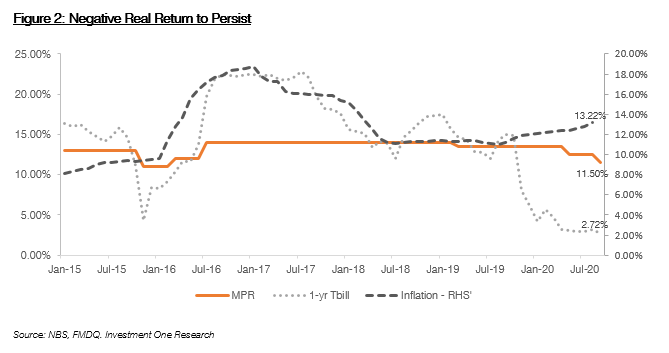