With oil prices having rebounded above $40 last week on the back of inventory draws and hurricane outages, bearish sentiment returned to markets this week due to a second wave of COVID-19 threatening to shut down European economies once again. 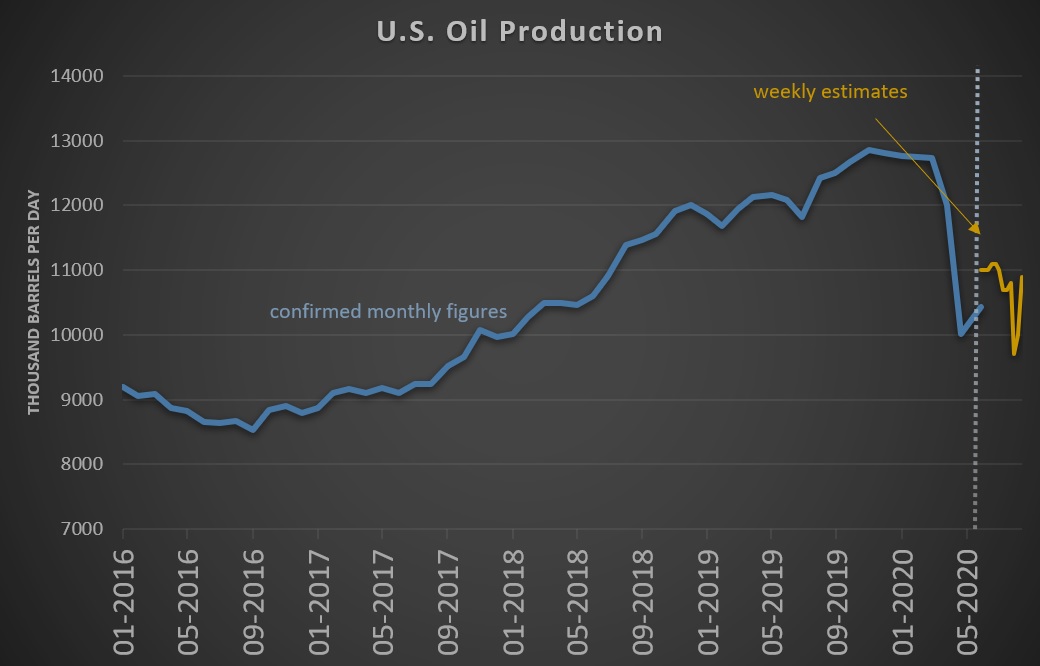 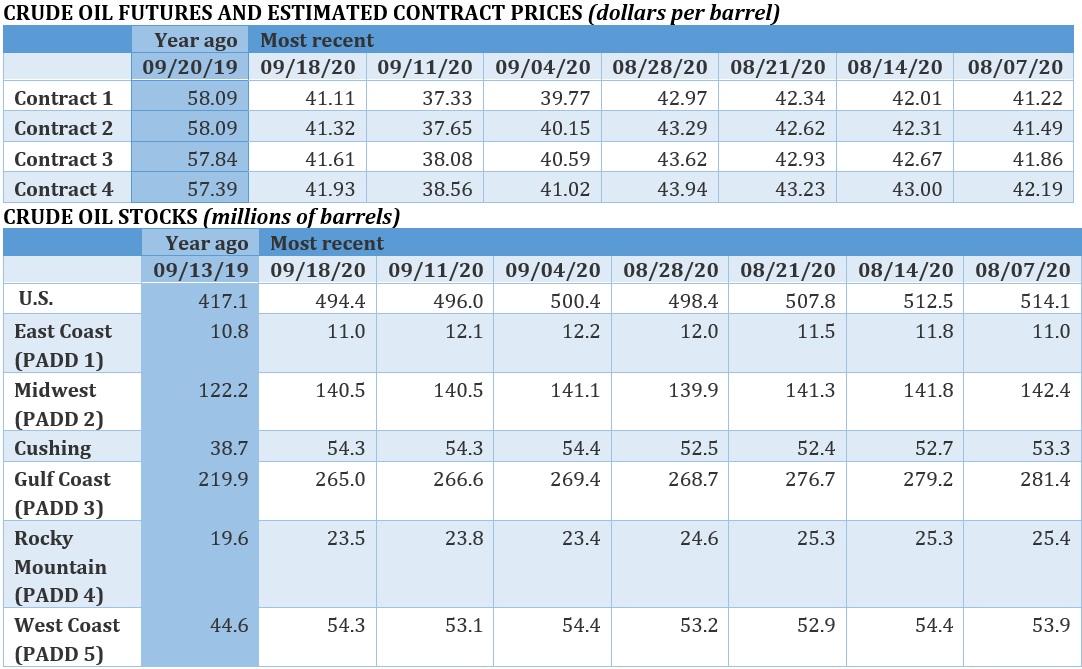 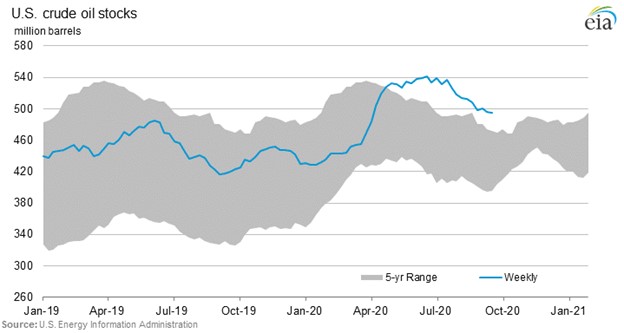 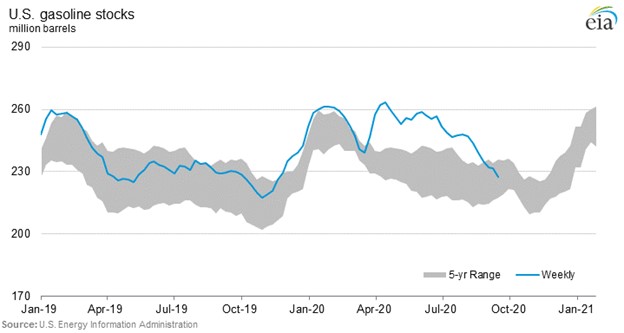 Oil prices continue to exhibit a familiar trading pattern, bouncing around in a narrow range. EIA data was bullish last week, showing inventory declines. But that optimism has been offset by concerns about the coronavirus and new restrictions in Europe.

California to ban ICE vehicles by 2035. Still reeling from historic wildfires, California Governor Gavin Newsom is seeking to end the internal-combustion engine. Governor Newsom ordered state regulators to come up with rules to phase out the sale of new gasoline or diesel vehicles by 2035. The move will have a dramatic impact on in-state refiners and oil producers, but because California consumes nearly 1 mb/d of oil, the impact will be felt globally. However, successful implementation is uncertain as it relates to ongoing legal battles, the makeup of the Supreme Court and the outcome of the presidential election.

UK to bring forward ICE ban. The UK is aiming to bring forward its ban on gasoline and diesel vehicles from 2040 to 2030. Prime Minister Boris Johnson is expected to roll out the announcement this autumn in an effort to accelerate the transition to electric vehicles.

Dallas Fed survey: 75% of oil executives say U.S. oil peaked. Three out of four oil executives surveyed by the Dallas Federal Reserve believe that U.S. oil production has already hit a peak. The Fed survey also shows business activity rebounding a bit from a low point in the second quarter, but nearly half of the respondents said that WTI would need to rise to $51-$55 for drilling activity to accelerate. Another third said WTI would need to increase to $56-$60, while 15 percent of respondents said it would require WTI above $60.

Oil prices rise on inventory draw. The EIA reported a crude stock draw of 1.6 million barrels for the week ending on September 18. Notably, distillate stocks also declined, falling by 3.4 million barrels. A glut of diesel had become a particular concern in recent weeks, so the drawdown was positive news for oil markets.

Tesla disappoints on Battery Day. Tesla’s (NASDAQ: TSLA) market cap fell by $50 billion after its highly-anticipated “Battery Day” disappointed. Elon Musk promised to manufacture an autonomous EV at a $25,000 price point within three years. The announcement was light on details and also echoed past promises to build a cheaper EV. “Nothing Musk discussed about batteries is a done deal,” said Roth Capital Partners analyst Craig Irwin. “There was nothing tangible.”

Tesla’s lithium mining plan raises questions. Elon Musk said that Tesla would produce lithium in Nevada near its Gigafactory, but the technology needed to produce lithium from clay is unproven, according to Reuters. “This plan from Tesla brings up a lot more questions than it answers,” Chris Berry, an independent lithium industry consultant, told Reuters. “Are we just supposed to take Elon Musk’s word for it that the cost will be lower than existing lithium projects?”

Exxon lines up bidders for North Sea assets. ExxonMobil (NYSE: XOM) is looking to sell its aging North Sea assets and exit the region, with several bidders already lined up.

Mercuria: Oil market can’t handle OPEC+ increase. The oil market won’t be able to handle the scheduled increase in OPEC+ production at the start of 2021, according to Marco Dunand, CEO of Mercuria. “We see a fair amount of oil going into ships, into floating storage, now,” he said. “We are filling up both tankers as floating storage and onshore tanks in September,” he said. “We do not need the extra oil,” he said, referring to OPEC+’s plans to taper the collective cuts at the start of the New Year.

Natural gas sank, then exploded. It has been a wild ride for natural gas over the past week. After plunging below $1.90/MMBtu earlier in the week, gas prices rallied from a seven-week low, rising more than 15% on Wednesday afternoon as the demand outlook for natural gas improved.

Saudi Arabia putting OPEC cohesion at risk. OPEC’s 60th birthday should have been reason for celebration, but its largest producer Saudi Arabia is increasingly putting its own interests before the cartel’s objectives and has put the very existence of OPEC at stake on a number of occasions.

IEA: Climate targets impossible without carbon capture. The IEA said that carbon capture, utilization and storage (CCUS) technology will be necessary to hit net-zero emissions targets. The agency said that the amount of CO2 captured must rise from 40 million tonnes today to at least 800 million tonnes by 2030, and investment will need to increase to $160 billion by then.

Total to convert refinery to biofuels. Total SA (NYSE: TOT) said it would spend 500 million euros to convert one of its refineries in France to produce biofuels and bioplastics.