According to this morning’s release from the National Bureau of Statistics, headline inflation rose by 66bps to 14.89% y/y in November 2020 – the highest level since January 2018 (15.13% y/y). On a month-on-month basis, consumer prices increased by 6bps to 1.60% – the highest level since May 2017. The reading was slightly below our estimate of 14.95% (-6bps), with the deviation stemming from the core basket.

Food inflation surged by 92bps to 18.30% y/y – the highest since January 2018. We believe the sustained pressure in the food basket was due to (1) the underwhelming harvest season, (2) the security challenges in the food-producing regions, and (3) the lingering impact of the border closure on the supply gap, which has continued to stoke pressure on consumer staples given weak domestic production capacity. Notably, the highest price increases in the food basket were recorded in Bread and cereals, Potatoes, yam and other tubers, Meat, Fish, Fruits, Vegetables and Oils and fats.

Elsewhere, core inflation tapered by 9bps to 11.05% y/y, a divergence from the uptick recorded in the prior month. This came as a surprise to us given the uptick in the Health (+46bps y/y), Transport (+46bps y/y) and HWEGF (+24bps y/y) sub-components, reflective of the lingering impact of the pandemic, energy reforms, and FX liquidity constraints. Similarly, on a month-on-month basis, the core index was down by 53bps to 0.71%, relative to the 1.25% recorded in the previous month.

We expect food inflation to continue its uptrend in December on account of (1) sustained impact of the poor harvest season, (2) lingering security challenges in food-producing regions, and (3) festive induced demand that will further widen the supply gap. That said, we expect the reforms in the energy sector to drive core inflation higher in December. On balance, we now expect the headline inflation to expand by 85bps to 15.74% y/y (1.61% m/m) in December. 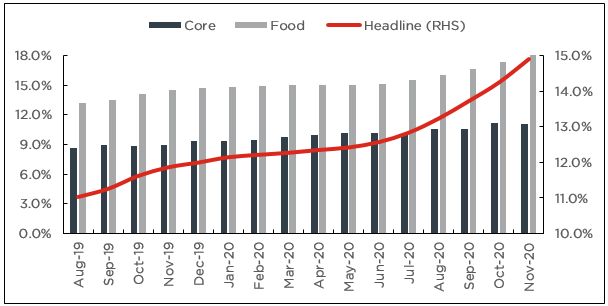