ZENITHBANK released audited 2020FY numbers this afternoon, which showed that the bank recorded strong earnings growth over the prior year. This performance belies the challenging operating environment brought on by the pandemic, as the bank recorded strong growth in profitability. On the EPS of NGN7.34 (+10.4% vs 2019FY), the board has proposed a final dividend of NGN2.70/s (2019FY: NGN2.50/s), which equates to a yield of 10.4% based on the closing price of NGN26.00/s as of the 23rd of February 2021.

Interest income grew by 1.3% y/y to NGN420.81 billion, supported primarily by the income from loans and advances to customers (+7.7% y/y to NGN250.81 billion) as risk asset creation was strong in the year (+20.5% y/y to NGN2.78 trillion). The other contributory lines recorded declines – investment securities (-7.8% y/y); loans and advances to other financial institutions (-1.9% y/y). We expected the decline in income from investment securities, even as assets held increased significantly by 62.7% y/y, given that yields on fixed income investments were at record low levels during the financial period.

Also, interest expense declined by 18.4% y/y to NGN121.13 billion, reflecting lower interest cost on borrowings (-43.7% y/y to NGN36.66 billion), and despite the moderately increased cost on deposits from customers (+0.6% y/y to NGN81.06 billion). Consequent to the decline in interest expense, net interest income settled higher by 12.2% y/y at NGN299.68 billion. After accounting for credit impairment charges (+64.5% y/y to NGN39.53 billion), net interest income (ex-LLE) settled 7.1% higher year-on-year. The exponential growth in LLE is in line with our expectations, given the application of the ECL model and the pandemic’s impact on the bank’s risk asset quality.

As witnessed all through 2020, non-interest income (NII) generation was strong, settling 8.5% higher y/y at NGN251.75 billion. The strong growth recorded was supported by expansions in FX revaluation gains (+276.4% y/y to NGN43.44 billion) and gains on investment securities (+3.3% y/y to NGN121.68 billion). This expansion in NII, alongside the growth in net interest income, led to a 7.7% y/y increase in operating income to NGN511.89 billion.

Operating expenses growth was moderate, as the bank continued to focus on cost management in the face of moderate gross earnings growth. Opex grew by 10.4% y/y to NGN256.03 billion, with the most pressure exerted by other operating expenses (+16.9% y/y to NGN102.76 billion) such as IT and maintenance costs. Consequent to the Opex growth relative to operating income growth, the bank’s cost-to-income ratio (ex-LLE) settled higher at 54.3% (2019FY: 50.0%).  Also, profitability was stronger, with profit-before-tax settling 5.2% higher year-on-year. However, profit-after-tax was 10.4% higher year-on-year, on account of a 26.6% y/y decline in income tax expense.

Comment: The bank’s performance was above our expectation at the start of the year, as we had expected that the combination of a slowdown in business activities due to the pandemic and continual sterilisation of funds by the CBN would result in weak income generation. However, the bank was resilient during the period, with this positive performance ultimately propelled by the strong balance sheet management and much-reduced tax expense. We are reviewing our estimates. 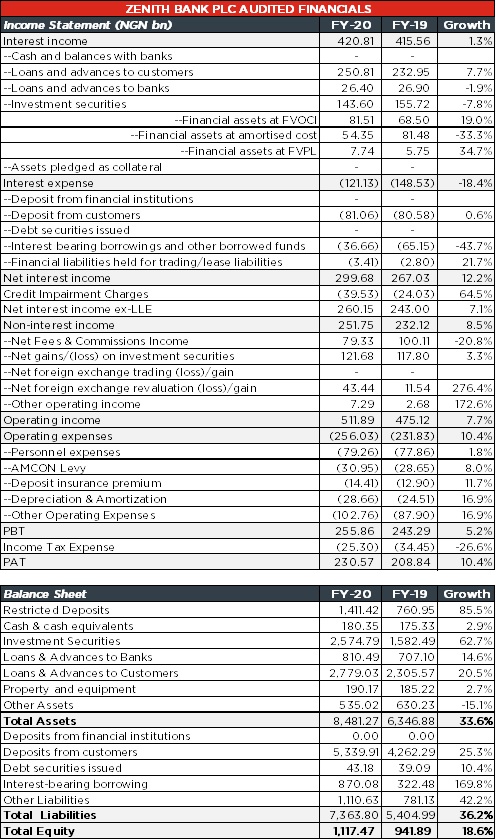