ZENITHBANK released its Q1-21 financial report earlier today, which showed that the bank recorded growth in its earnings. This performance was supported by growth in non-core income as core income recorded a decline relative to the corresponding period of the prior year. Notwithstanding, the growth in non-interest income and decline in interest expense was enough to propel earnings. Consequently, the bank recorded an EPS of NGN1.69 in Q1-21 (+5.0% vs Q1-20).

The bank recorded a decline in interest income of 11.5% y/y to NGN101.18 billion in the period as all major lines recorded declines– loans and advances to customers (-4.3% y/y to NGN64.67 billion), loans and advances to banks (-62.0% y/y to NGN3.38 billion), and interest from investment securities (-12.6% y/y to NGN33.13 billion). This is in line with what we have seen from other Tier-1 banks as a combination of reluctance to create risk assets and low fixed income yields pressured income. We are optimistic about growth in this income line over 2021FY as yields on assets have increased while the business environment portends improvement relative to the prior year, even as macro-fundamentals remain pressured.

Consequent to the growth in income relative to expenses, the bank recorded a profit before tax growth of 3.8% y/y to NGN61.02 billion, while PAT settled 5.0% higher y/y at NGN53.06 billion, given the lower income tax expense (-3.6% y/y).

Comment: The bank’s performance was strong during the period, and in line with general expectations. We expect stronger growth in funded income over 2021FY as risk asset creation ramps up and the bank reinvests asset maturities at current yields, which are now attractive. Our estimates are under review. 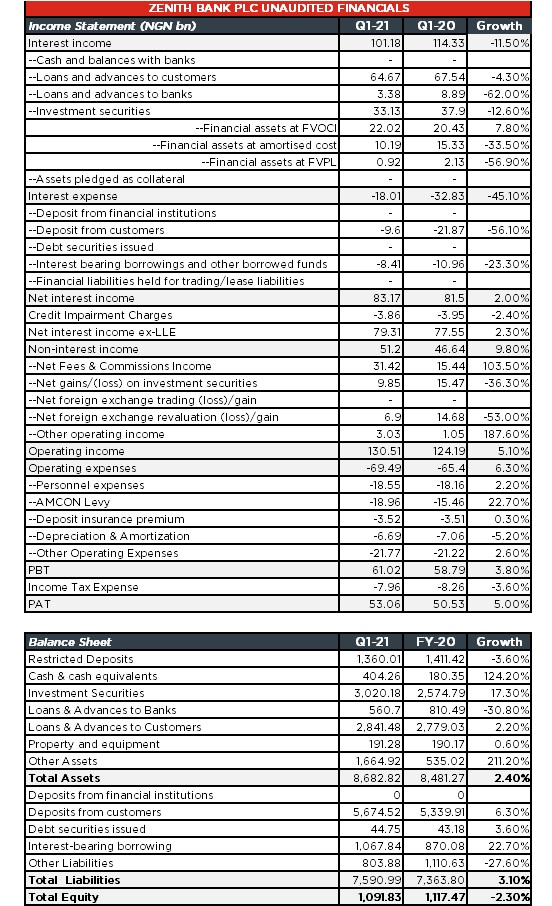