Event: GTCO released its H1-21 audited financials yesterday, which showed that the HoldCo recorded decline in its top and bottom-lines. Despite a moderation in funding cost, the significant decline in core income given a combination of weak asset creation and a lower yield environment drove the weak performance. Elsewhere, non-funded income growth was positive but not strong enough to offset the decline in interest income. Accordingly, the HoldCo recorded an EPS of NGN2.79 (H1-20: NGN3.31) and declared interim dividends of NGN0.30/share representing a dividend yield of 1.1% based on a trading price of NGN27.05/share (as of 10th September).

Interest expense also declined by 27.0% y/y to NGN19.04billion, despite deposits growing by 3.3% YTD to NGN3.63 trillion. However, we note that the funding mix deteriorated (CASA as at H1-21: 86.7% vs 2020FY: 88.9%) as the HoldCo took on some higher-cost (term) deposits, likely due to tight system liquidity that increased competition for deposits forcing elongation of the maturity schedule. Given the more significant funded income decline that outweighed the decline in expense, the HoldCo recorded a 16.1% y/y decline in net interest income. Also, despite moderations in provisions for credit impairment (-30.3% y/y), net Interest income settled 15.3% y/y lower at NGN102.34 billion.

On the other hand, non-interest income grew during the period, settling 11.4% y/y higher at NGN80.39 billion. This followed the growth in net fees and commission income (+65.3% y/y to NGN36.86 billion), gains from FX trading (+5.3% y/y to NGN8.05 billion) and discounts on digital earnings. As with preceding periods, income from e-business was a strong contributor, supported by reduced expenses on loan recoveries and bank charges.

Further driving this weak performance were higher operating expenses (7.2% y/y to NGN89.34 billion) recorded, with the most pressure exerted by AMCON levy (+27.3% y/y to NGN21.89 billion). On the back of OPEX growth and operating income decline, the cost-to-income ratio (ex-LLE) settled at 49.0% (H1-20: 43.2%); representing a significant deterioration in the bank’s efficiency (5-yr average to 2020FY: 37.3%). Consequently, the HoldCo’s profitability declined significantly relative to the prior year, settling 15.8% y/y lower at NGN79.41 billion.

Comment: The HoldCo’s performance is reflective of the pressured macroeconomic and business environments. For the rest of the year, we expect improvements in funded income performance as maturing funds are reinvested at higher yields and risk asset creation is accelerated. These should supplement the consistent growth recorded in non-funded income. Our estimates are under review. 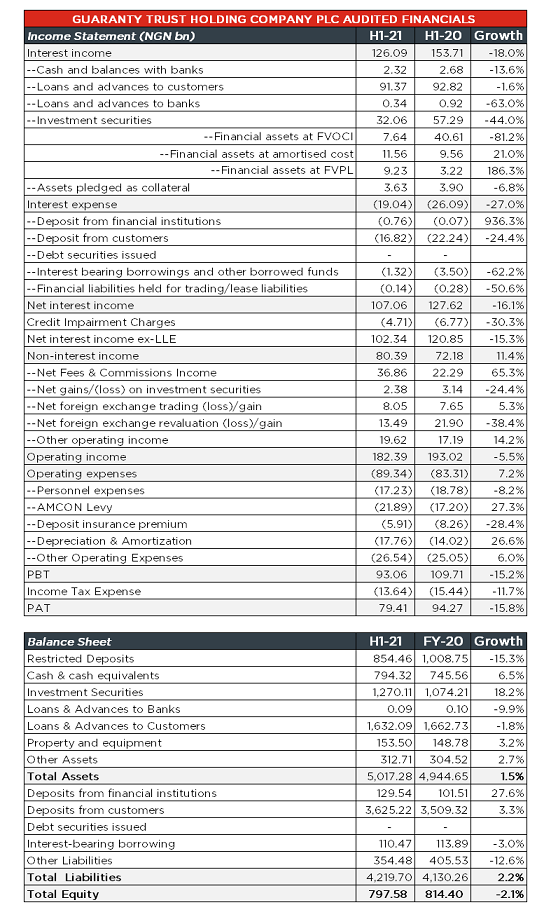