OPEC+ managed to stabilize oil prices after what had been an incredibly volatile week, with the cartel adding plenty of caveats to its decision to stick to its plan vis-a-vis oil production increases. 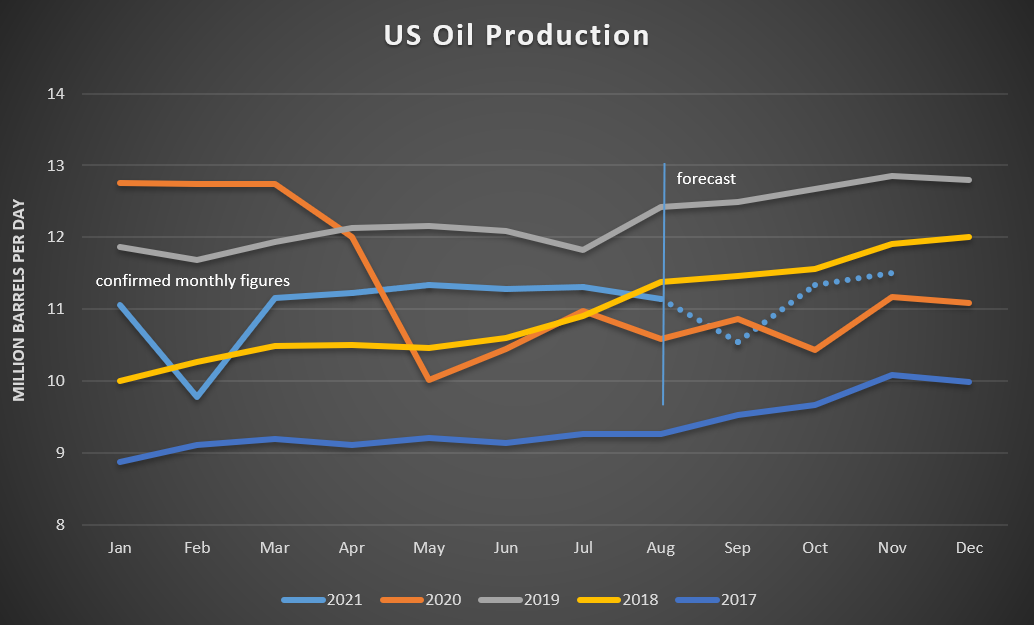 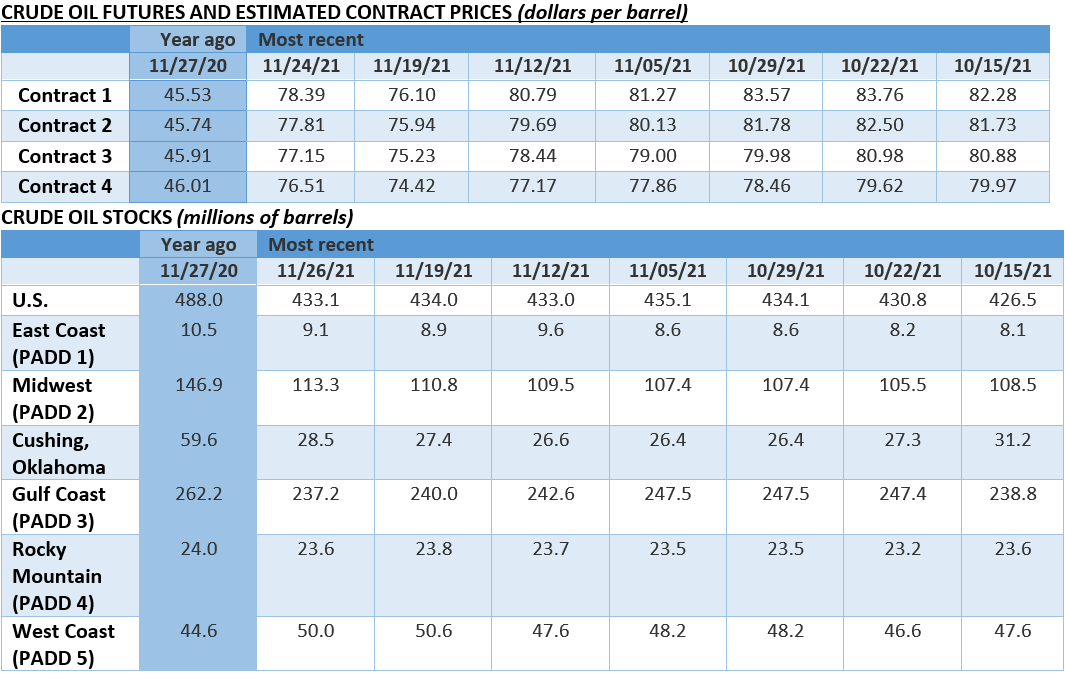 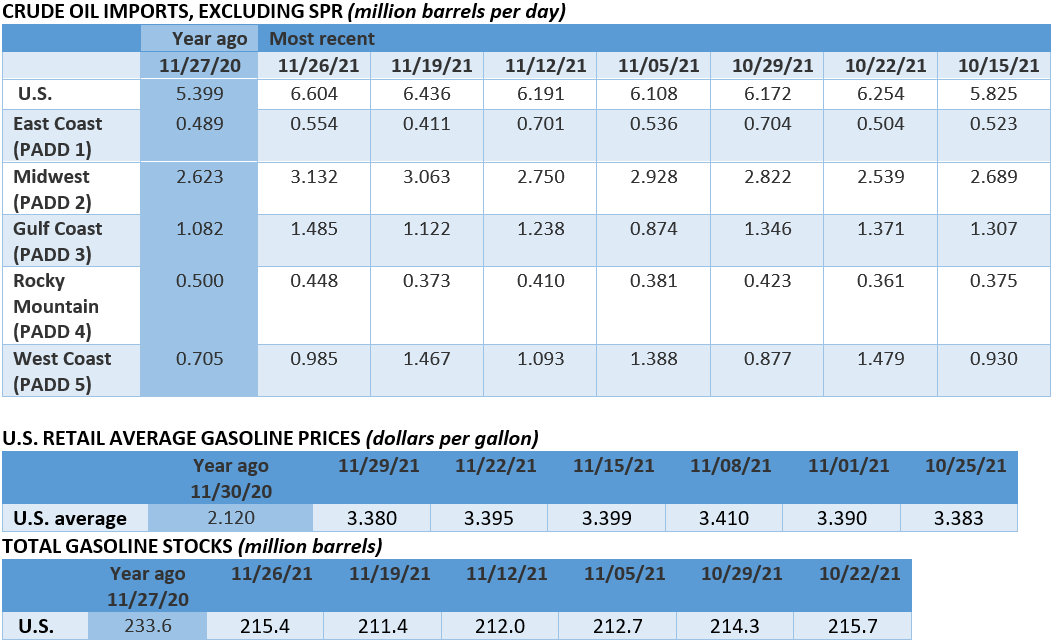 The most anticipated event of the week – a decision from OPEC+ on whether or not it would halt its monthly 400,000 b/d oil production increase – ended up being a bit of a non-event as the countries agreed to stick with the original plan but maintained the option to reverse that decision if necessary. Whilst oil prices did originally fall on the news, subsequent details about the caveats involved placated the market’s fears of OPEC+ disregarding Omicron risks. First, OPEC+ vowed to reconvene quickly if market conditions shift. Second, countries that have heretofore overproduced their quotas will see their upcoming production targets capped so as to balance their annual numbers. These caveats helped to push oil prices higher at the end of the week.

US Biofuels Mandates for 2021 to Be Issued Soon. With less than a month left of 2021, the US administration is reportedly readying to issue biofuels blending mandates for US oil refiners for 2021, a decision the Biden administration has delayed for more than a year. Considering RIN prices started falling this week, the market feeling is that of retroactively lower blending requirements.

Iran Submits JCPOA Draft Deal Proposal. Iran has submitted a draft proposal on the removal of sanctions and its nuclear commitments arising therefrom, with the sixth round of nuclear talks in Vienna kicking off last week.

Britain Triggers Carbon Cost Curbing Measure. Thanks to the cost-containment mechanism that allows London to issue additional carbon allowances if need be, the UK Government will now try to push down carbon prices after September, October, and November all saw prices above the trigger level of £52.88 per metric ton of CO2 ($70/mt).

Activist Investor Urges Glencore Coal Split. Activist investor Bluebell Capital is urging trading major Glencore (LON:GLEN) to spin off its thermal coal business – with vast assets in Colombia and Australia – arguing that the growing sustainability drive would punish the trader for not doing so.

Jordan Cove LNG Nixed Amidst State Aversion. Joining the ranks of Brownsville LNG, the $8 billion Jordan Cove LNG project that was supposed to export 7.5 million tons LNG per annum from Oregon ground to a halt, as the development company was unable to secure state permits and authorizations for its construction.

US Security Review Puts Deer Park Sale on Hold. Following this year’s deal that saw Royal Dutch Shell (NYSE:RDS.A) sell its 303,000 b/d Deer Park refinery to Mexico’s national oil company PEMEX, a prolonged review by the US Committee on Foreign Investment keeps on stalling the transactions as several congressmen call for a US government veto.

EU Members Against Power Market Overhaul. Nine EU countries, prime amongst them Germany, have opposed the planned overhaul of the EU power market that could see the bloc buying gas jointly to form strategic regional reserves, which could be used in periods of price spikes.

Australian LNG Hit by Outages. Australian LNG outflows suffered a double whammy this week as Shell’s (NYSE:RDS) Prelude floating liquefaction plant and one of the three processing units of Chevron’s (NYSE:CVX) Gorgon LNG plant were shut on the back of power outages and a gas leak.

ExxonMobil and Qatar Energy Land Another Cyprus Block. The Cypriot government awarded the offshore Block 05 to the consortium of ExxonMobil (NYSE:XOM) and Qatar Energy, adjacent to their jointly developed gas-rich Block 10, once a point of contention with Egypt as part of the acreage abuts its maritime borders.

Copper Prices Expected to Fall in 2022 on Oversupply. The world’s largest copper miner Codelco stated it expects next year’s copper price to average between $3.80-3.90 per pound, down from current prices of $4.30 per pound, forecasting that copper supply will outpace demand up until 2024.

China Caps Thermal Coal Prices for 2022. In another round of coal pricing interference, the Chinese government has reportedly capped annual thermal coal prices for 2022 at ¥550-850 per metric ton ($85-130/mt), urging miners and power plants alike to fix prices within that range under long-term supply deals.