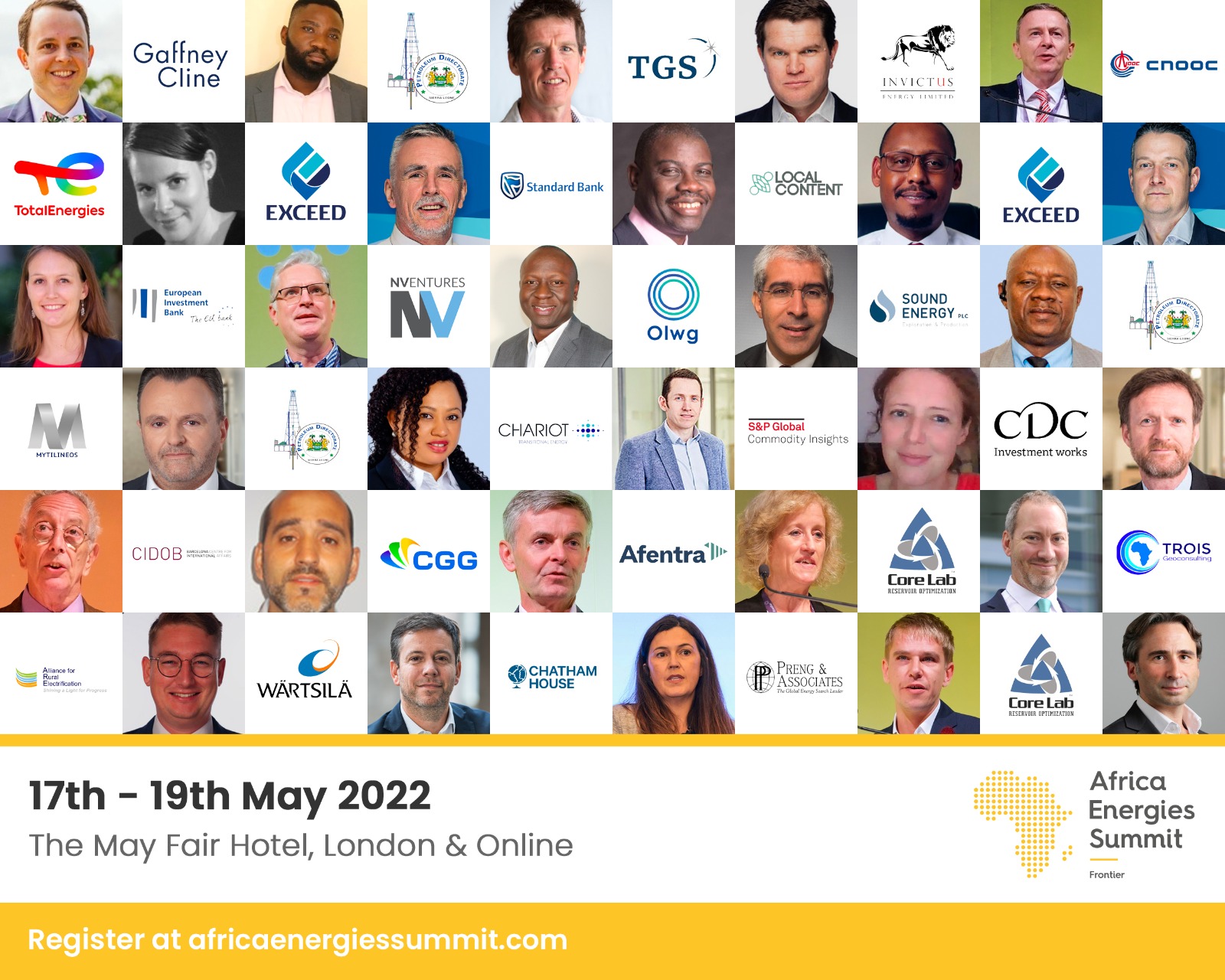 Bringing together Africa’s energy players and international investors, the summit will be instrumental in enhancing private sector investment across Africa’s oil and gas sector.Image Credit: AEC

The African Energy Chamber (AEC) is proud to officially endorse the upcoming Africa Energies Summit, set to take place in London on May 17-19, 2022. Organized by Frontier Energy Network, the summit unites African energy players, global investors and oil and gas producers for two days of networking and engagement. As African stakeholders look to secure more private sector investment across the entire value chain, the summit will be instrumental for introducing African players to global investors, ushering in a new era of multilateral cooperation and investment deals in Africa.

Africa is currently undergoing an energy sector transformation, with large-scale oil and gas projects coming online, new exploration campaigns kicking off and an accelerated drive for development across the entire value chain. In 2022 alone, countries across the continent are ramping up exploration through the introduction of bid licensing rounds. Notably, this week, the Petroleum Directorate of Sierra Leone – led by Director General Foday Mansaray – in partnership with the AEC, TGS and Africa Energy Partners, officially opened the fifth Petroleum Licensing Round for acreage covering an aggregate of 63,643 km ². With sizable discoveries made between 2009 and 2013, Sierra Leone is focused on realizing the potential of these finds, kickstarting further exploration and production across high potential sectors. Boasting major opportunities across the entire value chain, countries such as Sierra Leone are highly attractive, particularly for frontier and independent explorers.

As new discoveries are made in Africa – such as those made in Ivory Coast in 2021 and Namibia in 2022 – and demand increases domestically, Africa requires significant levels of investment if it is to realize the full potential of its energy resources and unlock long-term energy and economic growth.

In 2022, 600 million people continue to live without access to electricity and 900 million people with access to clean cooking solutions, emphasizing the need for the significant expansion of the African energy sector. In order to make energy poverty history by 2030 – a continent-wide target – global investors need to scale up investment in Africa while regional and international companies kickstart project developments. Already, the continent is seeing an influx in international and independent company participation, particularly as new discoveries reveal the frontier potential of Africa’s oil and gas basins. However, these independents raising capital to come into the continent need to be consistently engaged and encouraged.

In response to the changing dynamics across the continent, and with the aim of improving engagement with and among new and existing independents, Frontier Energy Network will be hosting its annual Africa Energies Summit in London, introducing African governments to global investors and paving the way for new capital networks to be created. As the continent moves to reawaken foreign investment, particularly in oil and gas, the summit will be critical.

“Having African oil and gas producers meet with global companies and investors in London is incredibly important. What Africa needs is a significant increase in private capital directed towards large-scale energy projects. In order to make energy poverty history by 2030, the international community needs to step up and improve investment, development and partnerships with Africa. In the same way, African governments need to make it easier for capital to come in, ensuring ease of doing business and that the regulatory environment is market-driven,” stated NJ Ayuk, Executive Chairman of the AEC, adding that, “The AEC would like to give credit to Frontier’s CEO Gayle Meikle for her continuous push to keep this summit going. Frontier Energy Network is not just about a single event. It is a movement, the yearlong engagement with members and the industry is something I admire about Gayle. She is the real deal. She has always put Africa at the forefront of her work, and the Africa Energies Summit are a testament to this.”

Representing the voice of the African energy sector, the AEC both supports and endorses the Africa Energies Summit, recognizing the role the event plays in improving investment in African energy. With a mandate to provide unrivaled insight into Africa’s rapidly changing energy landscape, the summit provides the opportunity for stakeholders to hear directly from key energy players investing in the continent, as well as from decision-makers, fast-moving independents, companies from across the entire value chain and national oil companies. By making a strong case for regulatory and fiscal reform in Africa, promoting the role these changes will have in improving the investor climate in Africa, the summit provides the ideal networking forum for African and global stakeholders.